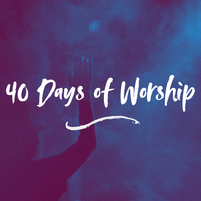 Welcome to 40 Days of Worship - our Lent reflection for 2022.
Each day has a different song selected by someone in the congregation, a Bible verse and a thought that explains why the song is important to them or how it links to Lent and Easter.
You can access it in a couple of different ways:
Option 1 - Download the entire booklet from the first blog post and follow it through on the PDF file.
Option 2 - Each day the song, verse and thought will appear (late afternoon the day before) so that you can just focus on that day's song.  This will also allow you to comment any thoughts that come to you that you think would be helpful for others to also know.
Either way, we hope and pray that this shared journey through Lent will help us to worship our God more in every way.